When Terry’s Army buddy stopped by the other day, along with cooking us a fabulous dinner he brought fresh raspberries, blackberries and blueberries that he’d picked up from a stand. I thought about freezing them for smoothies, but somehow I kept thinking about a nice triple berry cobbler or something like that.

After a search on Pinterest that yielded a number of possibilities I saved to my “sweet treats” board, I settled on this one: a mixed berry crumble. As usual, I made several modifications to the recipe. 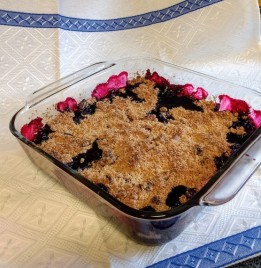 I love the recipe because it is gluten and sugar-free. (I use Bob’s Red Mill 1:1 Gluten Free Flour and really, it substitutes well in any recipe.) I started by just measuring three and a half cups of the berries, not worrying about separating the types. Instead of Xanthan gum, I used cornstarch because it was really just a binder needed for the berries. And I didn’t have fresh lemons, so I used a tablespoon of bottle lemon juice and omitted the zest. For the sweetener, I used Truvia regular, instead of Swerve confectioners. For the crumble, I used Tillamook butter, the Bob’s Red Mill GF flour and Lakanto Golden Monkfruit sweetener.

I have actually been really craving a berry pie or something like this, but Terry is not a fan of blueberries or blackberries, so I didn’t feel right buying it just for me. But, since I was gifted the berries, I threw caution to the wind. Too bad he doesn’t like it…I’ll have to make the sacrifice and eat it all myself. At least I can feel like it’s a relatively “healthy” treat since it’s sugar-free. Of course, I might need to use up some of the can of Redi-Whip that’s left in the fridge.