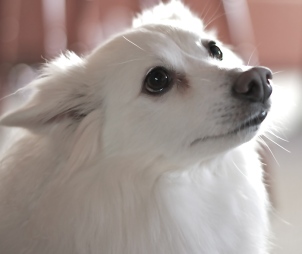 December holidays beg of sweet treat baking. That is upcoming, but this afternoon it was treats for our sweet pup Emmeline, that occupied my time.

We have struggled over the six years since Emma came into our lives as a pup, to find treats that do not upset her delicate system.

Wheat, milk and too much protein make her itchy, exacerbate her tear stains and occasionally even upset her tummy. These are the things we know for sure (through trial and error at Emma’s sake), and there are likely others. So we tread cautiously.

I have been scouring Pinterest to find some homemade treats I could make that seem healthy and do not contain the offending items. This afternoon I made three different kinds (which she will also share with her BFF Bella as part of Christmas gifting). The smart pup she is, Emma hung close in the kitchen as I mixed and baked and cut the treats….somehow she knew this activity was for her. She has taste-tested each already (albeit small pieces so we do not inadvertently cause what we call “bad poopers,” that typically results in a trip to the bathtub for a scrub of her nether regions) and it appears she has given them four paws up.

The first ones I made are Flax/Cheese treats (they are the ones in the jar in the photo). These were super easy with just three ingredients. Ground flax is supposed to be good for all of us, actually, so I hope it sits well with Em. Here is the link to the recipe. http://www.dogtreatkitchen.com/recipes-for-dog-treats.html

I didn’t change a thing…..although I think I could have baked them maybe a few minutes longer to get them a little crunchier. I just flattened the dough on the parchment with my hands, rather than roll it. That worked fine.

Next I made Bacon Bark Strips. (to the left in the photo) http://www.spoonforkbacon.com/2011/09/bacon-bark-sticks/

Emma was glued to my side when I started cooking the bacon. I got half a pound of applewood smoked bacon at Whole Foods and that was actually a little too much….so I didn’t cook it all (T will enjoy the remainder for breakfast). I used dairy milk, not goat milk as per the recipe (note: even though milk drunk straight from the glass has made her itchy, I’m thinking that the minute amount baked into the treat will not offend….I guess we’ll see), and I didn’t cut the dough until after it was baked (and I cut it into squares with a pizza cutter rather than big strips, because she can’t eat that big of a piece). Once the bacon was cooked, I could see that it was not going to yield four tablespoons of fat, so I melted in a little organic coconut oil I had on hand to make up the difference….I think you could use regular shortening too, if you needed to….half and half maybe with bacon fat. I also think it used slightly more than three cups of oat flour. I measured 2-3/4 cups but the dough was too sticky, so I just kept adding until it was such that I could turn it out on the floured counter to finish kneading in flour to make a smoothish dough. I just put it on the parchment on the cookie sheet and rolled it out there.

I rounded out the trio of treats with a healthy Fruit and Veggie treat. http://doggydessertchef.com/2012/08/31/fruit-veggie-sticks/

I think you could really add any fruit to this maybe instead of or in addition to the banana. I used brown rice flour instead of whole wheat, and again, I think any alternative flour (if you don’t want wheat), like oat or Bob’s Red Mill all-purpose gluten free would work. I just patted it out on the parchment on the cookie sheet like I did the flax treats and then cut the squares after it baked. I had a tiny bit of the bacon fat/coconut oil left from the previous treats, so I drizzled a little of that on the top and smoothed it out with the back of a spatula before baking (I figured a tiny bit of bacon flavor couldn’t hurt in case she had an inkling to turn her nose up at a fruity/veggie treat).

So now, Emma is set with treats for a bit. I will freeze what she won’t eat over the week and then dole them out after that, so they stay relatively fresh.

That was fun! Now, time to make a “kicked up” (peppermint schnapps and kahlua) cocoa and enjoy the Christmas classic “Miracle on 34th Street.” 🙂